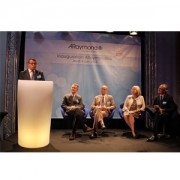 On June 4th, ARaymondlife inaugurated its brand new factory. An event in which took part Mr Jean-Jacques Legat, CEO of ARaymondlife, Antoine Raymond, CEO of the ARaymond Network and François Raymond (Director General of the Network) as well as numerous customers, suppliers, partners and collaborators of the ARaymond Network. Mrs Kamowski, Mayor of St Egrève and Mr Tempelaere, CEO of MEDICALPS were also present and gave a speech during the inaugural ceremony.

The new factory which represents an investment of nearly 9 millions euro was imagined to accompany the growth of the company on the healthcare market.
Organized in several standardized workshops of 300 m ², dedicated by type of product, each workcell contains a 200m ² ISO 7 cleanroom for the injection, assembly, primary packaging and a space apart from the cleanroom for secondary packaging (100 m²). A laboratory of 140 m², including a 30 m² ISO 7 cleanroom is used for the necessary tests and quality controls on the products manufactured. These new premises offer a favorable environment for the development of the activity. The site configuration aims to be evolutionary from 3700m ² to 7000m² : the ground reserve offers the possibility of adding about ten similar workshops.

BASF Beauty Care solutions and Genel highlight the implication of a microrna...
Scroll to top