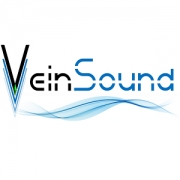 Varicose veins is a disease that affects millions of people worldwide. The Edinburgh Vein Study shows that 32% of women and 40% of men, in a cohort of 1566 randomly selected subjects, had trunk varicosities.

Varicose veins are dilated and tortuous veins of the superficial venous system of the lower limbs. This condition is characterized by reflux, obstruction, or a combination of both of the blood in the veins of the leg. The symptoms associated to this disease are leg heaviness, tiredness, itching, nocturnal cramps, throbbing and aching. Symptoms can be worse at the end of the day and aggravated by a standing position.

We at VeinSound are developing a non-invasive new method of treatment using High Intensity Focused Ultrasound (HIFU) with the hope of success rates of invasive treatments and fewer risks than conservative treatments. We use focused HIFU to create a phenomenon of cavitation bubbles in varicose veins, this phenomenon destroys the inner layer of the vein, in a technique known as histotripsy. This phenomenon creates a fibrosed thrombus called sclerus and ultimately the collapse of the varicose vein.

We have conducted a proof of concept study on rabbit ears (18 rabbits, veins of 0.5 to 3mm), where veins were collapsed using a prototype of our future probe. 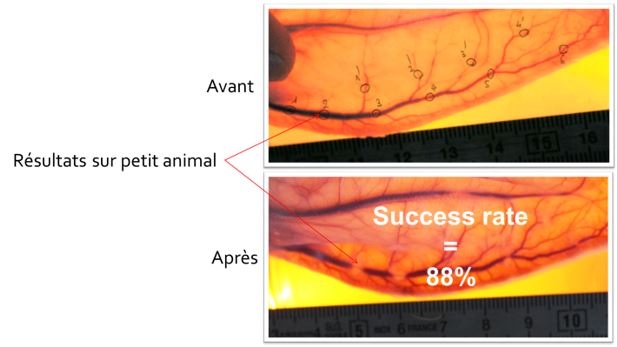 This proof of concept leads us to a feasibility study on veins of three sheep, where we could collapse healthy veins using the cavitation phenomena without affecting the surrounding tissues. Indeed, our pre-clinical study shows convincing result with the cavitation method, which by an erosion of the endothelium generated the formation of a sclerus (fibrosed and adherent thrombus) at the site of the formation of a cavitation cloud during the test. Complete obliteration of the vein was observed by ultrasonography at control at 3 days after treatment, with the occurrence of partial recanalization at 20 days. Histological sections show the formation of fibrous tissue in place of the thrombus. We found that cavitation did not cause skin damage even though the skin of the sheep, with a greater thickness, more hair bulbs, is more difficult to cross and that its structure can promote the phenomenon at the surface.

The next step for VEINSOUND is to test our device on human varicose veins, to demonstrate the success rates we are hoping for and the low risks. To do so, we are going to enroll 50 patients with varicose veins of C2 class and treat them with our device. The success will be identified as the complete occlusion of the varicose veins and improved quality of life for our patients, quantified by specific questionnaires.