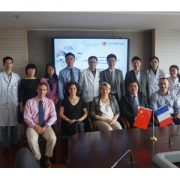 Both provinces are 30 minutes and 1 hour by train from Shanghai. Different axes of cooperation are in progress between the Chinese and the French establishments, mainly based on the Grenoble University Hospital’s area of excellence like severe traumatology, neurosurgery and orthopaedics.

TECHNIDATA strengthens its presence in the Middle East and announces the signature...
Scroll to top