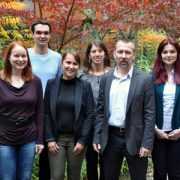 ECRINS THERAPEUTICS, a French biotech which is developing an innovative anti-cancer drug candidate, announces the launch of their second fund raising campaign on the French crowdfunding platform – WiSEED.

Established in 2010, ECRINS THERAPEUTICS develops ET-D5, an innovative small molecule for cancer treatment. Stemming from research performed by the founders at the French National Institute of Health and Medical Research (INSERM), ET-D5 has a unique therapeutic target and a double mechanism of action 1) an antiproliferative activity which blocks the multiplication of cancer cells 2) an anti-vascular activity which specifically targets the vessels that supply the tumor.

ECRINS THERAPEUTICS ran their first fundraising session in June 2015 with WiSEED and several Business Angels – allowing them to achieve an important milestone in the development of the drug candidate : performing the obligatory toxicology studies.

“These studies allowed us to determine the level of toxicity and learn how the drug candidate behaves inside an organism. The results will serve as a base for defining the doses which will be administered to humans during the clinical trials in order to reduce the risks to a minimum for the first patients,” explains Dr. Aurélie Juhem, COO of ECRINS THERAPEUTICS.

In advance to these studies, the industrial synthesis of the active principle (ET-D5) was performed and a drug formulation was developed (with excipients), improving the molecule’s bioavailability.

“We are proud of these results which have advanced the project considerably. In fact, the absence of major toxicity shown by these regulatory studies have allowed us to reduce the risks linked to developing the ET-D5 and increase the project’s value,” states Dr. Andrei Popov, CEO of ECRINS THERAPEUTICS.

Today, the company is aiming for the next milestone: obtaining authorization for the first human clinical trial from the French regulatory agency – the ANSM.

ECRINS THERAPEUTICS has set the following goals with this campaign:

With this new fundraising campaign, the start-up will be able to pursue the development of its drug candidate with the same momentum it has shown since 2015.

TECHNIDATA strengthens its presence in the Middle East and announces the signature...